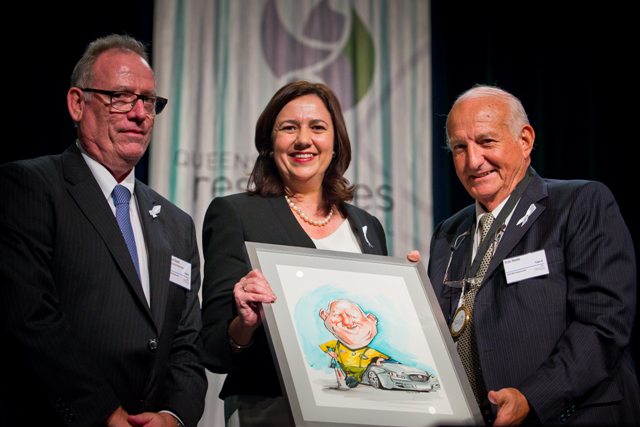 Mr Neale – now an advisory board member at Brisbane project management and advisory firm Siecap – was presented with the accolade at last Wednesday’s Queensland Resources Council Annual Lunch at the Brisbane Convention and Exhibition Centre.

The Queensland Resources Council is the state’s peak minerals and energy representative body, attracting a 720-strong audience to the event, made up of guests from government, industry and the corporate sector.

When accepting his award, the senior businessman said the current mining downturn was a real “bugger” and the ailing industry would struggle for decades.

Mr Neale also forecast that the keys to a successful future would require improved productivity and efficiency through optimisation and automation. Regrettably this would impact some employees but others with the required skill sets would be in high demand. The sector needs to continue the battle of global competitiveness by slashing costs, such as on site truck drivers pulling in six-figure salaries in favour of driverless vehicles operated remotely.

With a stellar career in exploration and production across several continents and commodities including gold, base metals, synthetic fuels and coal, Mr Neale is now applying his expertise to Siecap’s expansion into the major infrastructure market.

He is also renowned for the “coal deal of the century” acquiring and divesting the New Saraji Coal Project in Queensland and specialises in driving low-cost, optimally efficient operations.