eCommerce in the spotlight: surviving in the post-Amazon world

As part of the final leg of the eCommerce Roadshow, specialist project management and advisory firm Siecap jointly hosted a supply chain breakfast with eCommerce fulfillment guru Jonathan Reeve at The Brisbane Club, on Tuesday 1 May 2018, entitled: Surviving in the post-Amazon world: eCommerce in the spotlight.

The event was well attended by supply chain senior leaders from companies including Origin, Aurizon, Caltex, Thiess, Miele and Australia Post to name a few. Presentations focused on the impact of Amazon’s expansion into Australia, and how to successfully adapt your last-mile supply chain and capitalise on the eCommerce revolution.

Irvine set the scene by highlighting the increasing influence of eCommerce on supply chain strategy.

“eCommerce as a percentage of the sales channel is set to dominate within the next decade and will touch everything, both directly and through raised expectations on what traditional models will need to provide,” he said.

eCommerce fulfilment guru Jonathan Reeves’ presentation focused around what Amazon can teach us as a case study for future success.

Jonathan provided insights into the secret of eCommerce success and understanding Amazon, from the company’s origins to how the Amazon fulfilment model has adapted and evolved over time.

“Amazon is the only online player in Australia that has consolidated their delivery model and have a range of products to sell, so we shouldn’t underestimate them,” he said.

Amazon has recently been in the news, by delivering a double punch: reporting its best revenue growth in more than 5 years while topping US$1 billion in profits for the second straight quarter. 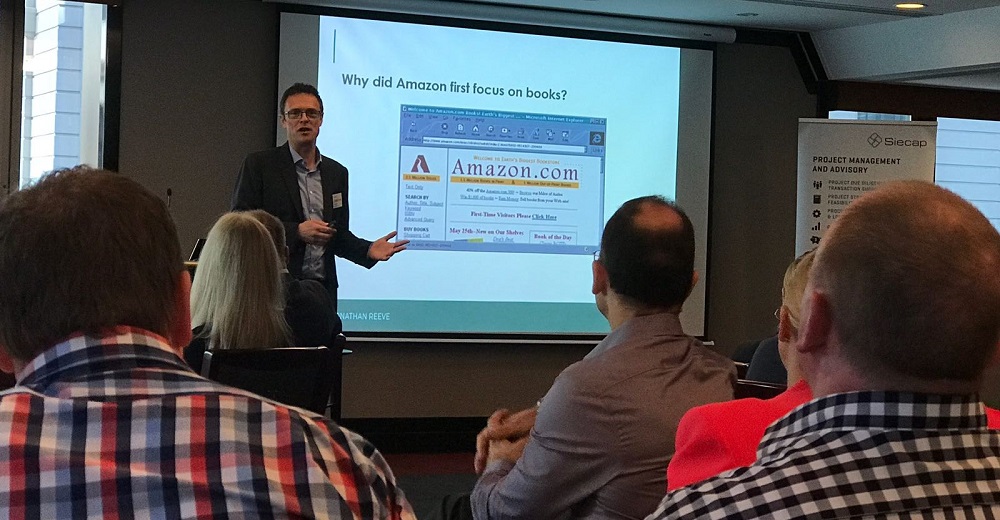 Siecap Director of Consulting, Geoffrey Knowles then presented on winning strategies for eCommerce fulfilment and looked how demographics play a key role in eCommerce hot spots.

Knowles advised that to win eCommerce fulfilment, organisations must manage the evolution of the four pillars:

“The capability of eCommerce participants to react quickly to the dynamic landscape will separate the winners from the losers”, he said.